The objective of this project was to develop a bespoke, fully automated system which delivered loose skillets (cardboard boxes) to a case erector machine. Mobile Industrial Robots (MIR) were the most effective way of transporting these skillets, and the idea was that the customer would be able to run a fully ‘lights out’ operation within their factory.

As well as transporting the boxes of skillets, it then needed to successfully transfer these to a conveyor module, integrated into a bespoke tipping and loading machine. So as you can see, there were a lot of things to take into consideration and various elements which needed carefully planning! 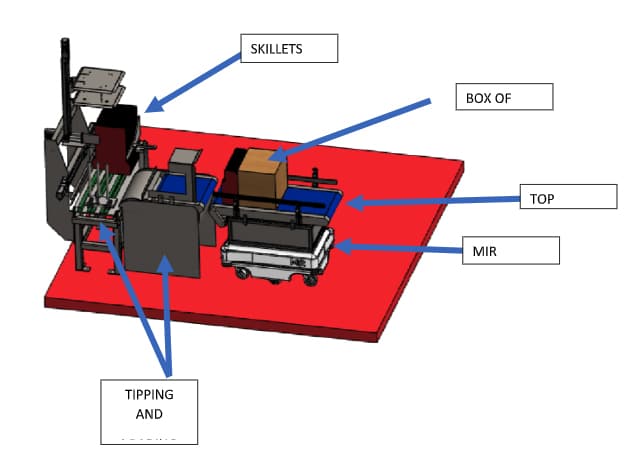 Once the skillet box has travelled into the tipping and loading machine, it then needed to be transferred to a dispensing area at the end of the processing line. Ready for collection one at a time by a case erector machine.

The team at Euroflow Automation set to work straight away to design this bespoke system for the customer. The main challenge that we faced was getting the MIR to communicate with the rest of the system. Although it was delivering the skillets accurately, it didn’t park itself at exactly the right position each time to begin with. To overcome this issue, we developed a send & receive sensor array that would communicate with both the robot and the system.

The skillet loading machine also underwent several prototype stages before we were happy with the final solution. The skillets needed to remain upright, and as they were only 1.2mm thick this was not an easy task! Servo drivers were then added to allow the case erector to collect one skillet at a time on the other end of the system. In order to only release one at a time, constant pressure needed to be added to the stack so a check sensor was added to combat this.

Once we were happy with the final prototype, we then moved onto the MIR activation side of things. It was important that the system knew when it was about to run out of skillets, so that the robot resupplied the tipping and loading machine. This was a very difficult thing to include, as we needed to use the software that was already programmed within the MIR, and integrate this into our own system. After lots of thinking and coding, our software subcontractor created the innovative solution that we needed.

The main challenge with this project was to automate the entire process, with zero need for human intervention, thus helping to reduce the client’s carbon footprint. The other real hurdle that we had to overcome was with the tipping and loading system. During our testing process, we realised that the design needed to have cylinders mounted in varying stages to push the box in place once it had been tipped. This was essential so that the box would be in line with the case erector.

We really appreciate you taking the time to report this bug, we will look into it ASAP.